The Unfinished Portrait of Bankside Gallery

Anyone who follows my other blog, the book reviewing Fell From Fiction, will know that I am a sucker for anything Agatha Christie wrote. It came to my attention this week that, in honour of the 125th anniversary celebrations of her life, there was an exhibition called “Agatha Christie: Unfinished Portrait” on in London so I naturally dropped everything and had to go see it. 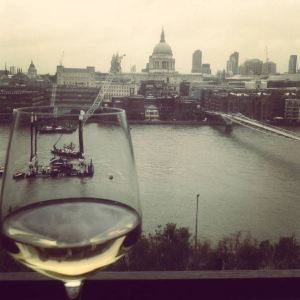 As soon as I arrived at London Bridge though, someone thought it amusing to begin pouring the entire contents of the Pacific over the city and with only a small umbrella as shelter, I became steadily more and more sodden as I walked along Southbank in the direction of Bankside Gallery. Eventually, with only fifty or so metres to go, I succumbed to temptation and disappeared into the Tate Modern for a drink on their top floor bar. Alright, it might have been unnecessary, but the wine was good, it had stopped raining by the time I’d finished, and I got this lovely picture up there.

Bankside Gallery is a small, one-room gallery with a gift shop off to one side stocked with books about art and artists, as well as the usual tourist trappings. I wasn’t allowed to take photographs inside, but instead whipped out my Moleskine and took notes on what was inside.

The exhibition has been set up with the help of Agatha Christie’s grandson Mathew Prichard, her only living relative, who has delved deep into the family’s personal effects to draw up previously unseen photographs of the Queen of Crime. Displayed all around the walls along with a timeline of her life and works, and quotes from her autobiography, private letters and notebooks, they form a version of the writer that few people ever knew.

Most people, from what I can gather, seem to think of her as an old woman hunched over her typewriter churning out mystery after mystery, but the reality seems very different indeed and the gallery goes a long way to showing that she had a fascinating and varied life, a joyful childhood, a good sense of humour and never actually had any ambitions of being a writer.

Agatha with a mandolin; the first hipster

In the gallery, I discover that she actually wanted to be a pianist or a singer, but wasn’t good enough at either. She became a nurse during the First World War, and that is what made her so knowledgeable about poisons and why so many of her characters were killed by them. It details what everyone knows about her, that she once went missing for eleven days, and gives an insight into the breakdown of her first marriage and the beginnings of the second, one that was certainly a lot happier.

It transpires that she didn’t smoke or drink, but not because she didn’t want to. She looked on enviously at those who enjoyed those vices, but was unable to appreciate them herself. It is testament to her success that she is the only female playwright to ever have three shows on in the West End at the same time (The Mousetrap, Spider’s Web and Witness for the Prosecution), and when she died, every theatre in the West End dimmed their lights for an hour. At 85 when she died, she didn’t fear death, but was merely interested in finding out more about it.

At the centre of the gallery sit three things that, for me, were the most incredible items here. First is a painting of Christie by Oskar Kokoschka that normally never leaves Prichard’s house. The second is a rare recording of her voice – Christie never did a television interview and didn’t care for speeches – in which she discusses that she, like every other writer, suffered from writer’s block, and knew the pain of the right words coming when you were miles from anywhere to write them down. And thirdly, next to some first editions of her early books, sits her Remington typewriter, the very machine that produced so many wonderful works of literature.

Christie isn’t for everyone, but if you go to the gallery, your opinion is likely to change regarding her anyway. She enjoyed life, hugely. She liked roller-skating, tennis and is believed to have been the first English person to ever surf standing up, something she brought back from a holiday in Honolulu. The exhibition is only on in Bankside until September 6th, so I urge you to go along this week if you get a chance. 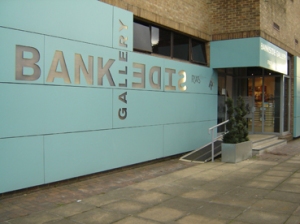 I’m aware that this entry has been more of a potted history of the life of Agatha Christie rather than about London itself, but the point of this blog is to explore all aspects of London and what is London without its people? Agatha Christie may have been born in Torquay and died in Oxfordshire, but in the interim she spent a lot of time in London, lived in Chelsea, produced numerous plays for the West End and set a lot of her books here. I’ll cover these on another day.

Once more, I suggest you hurry along to the Bankside Gallery and explore the life of this amazing woman. And if you can’t make this one, I am sure that another exhibition will be open soon enough that will entice you to one of the most charming galleries in the city.