A Rather Blustery Day

The wind’s been getting up a bit lately around the city, and while I was looking up some interesting facts about the history of London, I came across a report of the tornado that hit London in 2006. I had absolutely no memory of this happening – it’s not like central USA here where tornadoes and hurricanes are ten a penny – so I delved a little deeper.

On the 7th December 2006, a tornado measuring T4 on the TORRO scale (which apparently equates to 16 on the Beaufort Scale) hit Kensal Green, passing through a number of streets in just a couple of minutes, ripping roofs off of buildings, upturning cars and injuring six people. The country had been undergoing strange and unstable weather phenomena all morning, having been affected by Ulrike, a strong Atlantic low pressure system, but a tornado was just the oddest of them all. Thunderstorms had been covering Cornwall, but it all came to a head over the capital, with strong winds, sleet and rain preceding a tornado that, according to one witness, looked “amazing […] but then it touched land … [and] went from exciting to terrifying.”

This is far from the first time that the wind has got a bit much in the city. Most of Britain still talks with a certain reverence of the Great Storm of 1987. Although considered by some to be a hurricane, officially it an extratropical cyclone with hurricane force winds, though if you ask me, that amounts to the same thing anyway.

“Aftermath of the Great Storm of 1987” by David Wright.

The afternoon of the 15th October hadn’t had any particularly strong winds. Michael Fish, a meteorologist who has never lived down the experience, gave the weather forecast and stated, rather flippantly, that while it was going to get a bit windy, most of it would pass over France and Spain. He said that a lady had called the BBC asking about a hurricane, but he said there wasn’t one coming. He says now he was quoted out of context, but the incident is so ingrained in the nation’s psyche – the footage even appearing during the 2012 Olympics Opening Ceremony – that it hardly matters.

The strongest winds that night reached 120mph, and most of the south was battered beyond recognition, causing two billion pounds worth of damage in one night. Fifteen million trees were downed across the country, and London wasn’t free from any of that. Specimens of historic importance and great age were felled in such places as Kew Gardens and Hyde Park, and there was barely an avenue that didn’t have some trees knocked down, often crushing cars beneath them. The following morning, with no power across parts of the city and the public transport network down, many people stayed off work.

But let’s go further back in time, to another Great Storm. This time, the Great Storm of 1703. The calendar at the time said 26th November, but with the switch in dates later that century, it would have been equivalent to 7th December, oddly the same day as the 2006 tornado. Queen Anne was on the throne and she was led to shelter in the cellars of St James’s Palace to hide the damage to the roof. Across the city, two thousand chimney stacks were knocked down, the roof was blown off Westminster Abbey, and some seven hundred ships were blown together and destroyed in the Thames.

This being a slightly less scientific time, they did not all trust their barometers that this was something atmospheric. The church said it was because God was angry at all the sinning happening in England, Daniel Defoe said God was punishing the people for “poor performance against Catholic armies in the War of Spanish Succession”. Curiously, however, the storm may have helped the rising industry of journalism, and was the first weather event to become a national news story, with special editions of the paper listing information about the damaged and the dead. 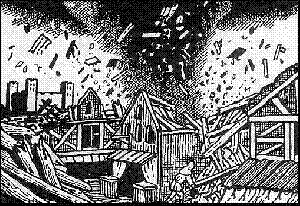 But let’s go right back. The earliest disaster we can find. That’s the first recorded tornado of British history; the London tornado of 17th October 1091. As a bonus factoid, it was a Friday. If the one in 2006 was measured as a T4 and was destructive enough, it was nothing compared to this. Modern scientists believe it would have measured T8, which suggests winds of up to 240mph, capable of throwing cars long distances, toppling high-rises with shallow anchors, and twisting skyscrapers in their foundations.

Bear in mind, then, that in 1091 there weren’t any skyscrapers, cars or high-rise buildings, suggesting that the damage done was almost absolute. These are wind speeds that can blow wooden houses apart with ease. Despite the severity, only two people were known to have died in it. The wooden London Bridge was demolished and St Mary-le-Bow church was badly damaged. It’s popularly remarked upon that four rafters from its roof each measuring 26 feet were forced into the ground by the wind with such power that only 4 feet remained visible. The storm did little to help the reputation of William II, who had just raided the resources of the churches. The people felt the storm was a judgment on his wickedness.

But, as ever, London clawed itself back from the brink, and rebuilt itself once more. After all, this is Britain. When did we ever let a bit of bad weather bother us?